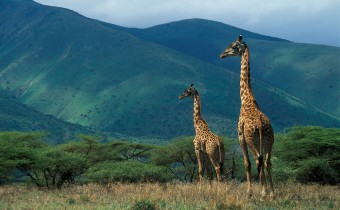 Ngorongoro Conservation Area is a World Heritage Site and International Biosphere Reserve situated some 190 kilometers west of Arusha, between Lake Manyara and Serengeti National Park. Covering approximately 8,292 square kilometers, the area consists of the Ngorongoro Crater (the world’s largest caldera), the Olduvai Gorge, Ndutu, the Empakai crater and the Oldonyo Lengai Mountain. The Ngorongoro Conservation Area is a pioneering experiment in multi-purpose land use where people (the Maasai), their livestock and wildlife coexist and share the same protected habitat.

Wild animals are protected as in the National Parks. The craters of Ngorongoro and Empakai are reserved exclusively for wildlife, while the rest of the Conservation Area is shared by wildlife, people and livestock. About 200 years ago the Maasai arrived and ever since colonized the area in substantial numbers; to date they are the main residents of Ngorongoro doing pastoralism by moving widely with their herds of cattle, sheep, goat and donkey in search of pasture and water, their traditional way of life allowing them to live in harmony with the wildlife and the environment.

Maasai are one of the tribes with very strong culture in Africa, they are normally live in clans which are characterized by a cluster of their mud houses build closely next to each other and referred to as a “Bomas”. These Bomas are built in largely open areas where they can accommodate their livestock and well fenced off with thorny bushes for protection. The following are highly recommended Bomas to visit when in Ngorongoro; Kiloki Senyati Cultural Boma, Loonguku Cultural Boma, Irkeepusi Cultural Boma and Seneto Cultural Boma.

Circumcision of both males and females is practiced among the Maasai. This practice enrolls one from one age group to another. It is during circumcision that one is taught of their role in society; the men are taught to protect their families and property whilst the women are taught how to care for their husband’s children and community in general.

The crater floor is covered with plains and animals, protected within the confines of the crater walls, that includes; zebra, wildebeest, gazelle, elands, large herds of buffalos, jackal, Tanzania’s few remaining black rhino are protected and regularly sighted in the crater. Huge tusked elephants, large predator population of lions, hyena and jackal, cheetah are also found, as well as thousands of lesser and greater flamingoes in the Soda Lake,

The short rains are from November to December and the long rains from February to April, the latter generally being considered off season. However, the rainy season is very exciting time of year as this is when animals congregate on the Short Grass Plains to have their young. Late February, early March is usually a good time to see the migration on the plains. In turn, this attracts large number of predators and results in spectacular interaction between predators and prey.

Dry Season (May to October)

The dry season holds its own beauty, in Africa the dry season is the best time for gate viewing because the animals are concentrated along permanent water sources. Within the Crater game viewing is excellent during this time. However the Short Grass Plains become completely devoid of game during this season. This is the best time of the year to visit Empakaai and Ndutu, which has resident game that remains around the late all year around.